Read all the news about Motion Dynamics™ Ltd

The purpose of this Case Study is to demonstrate and discuss the effectiveness of Active Assisted Isolated Stretching treatment as applied by caregivers at Motion Dynamics on a patient with persistent mild to severe back and neck pain.

The patient is a 40-year-old male with a sedentary working lifestyle. He is also an amateur racing car driver. He suffered from chronic lower back pain, neck irritation, lack of shoulder flexion from adhesive shoulder capsules and poor finger grip strength.

This condition proved especially challenging for the patient given his specific activity. His limited range of motion in the neck can caused stiffness and irritation as well as discomfort. His driving was hampered, especially at high speeds.

This kind of persistent comfort can also be dangerous for more conventional driving. It is difficult to drive a car safely if an individual cannot turn their neck far enough to check their ‘blind spot’.

The patient had previously tried conventional physiotherapy for his back and neck pain, including massage, heat treatments and electro therapy, but these had proved ineffective.

As a first step, the patient did a full postural screening and a range of motion testing on all the major joints to see where his movement restrictions were, and to identify musculoskeletal compensation that could have been contributing to his lower back pain.

This postural assessment was performed standing (weight bearing) and lying down (non-weight bearing) to check for tilts, torque and rotation throughout the body structure. 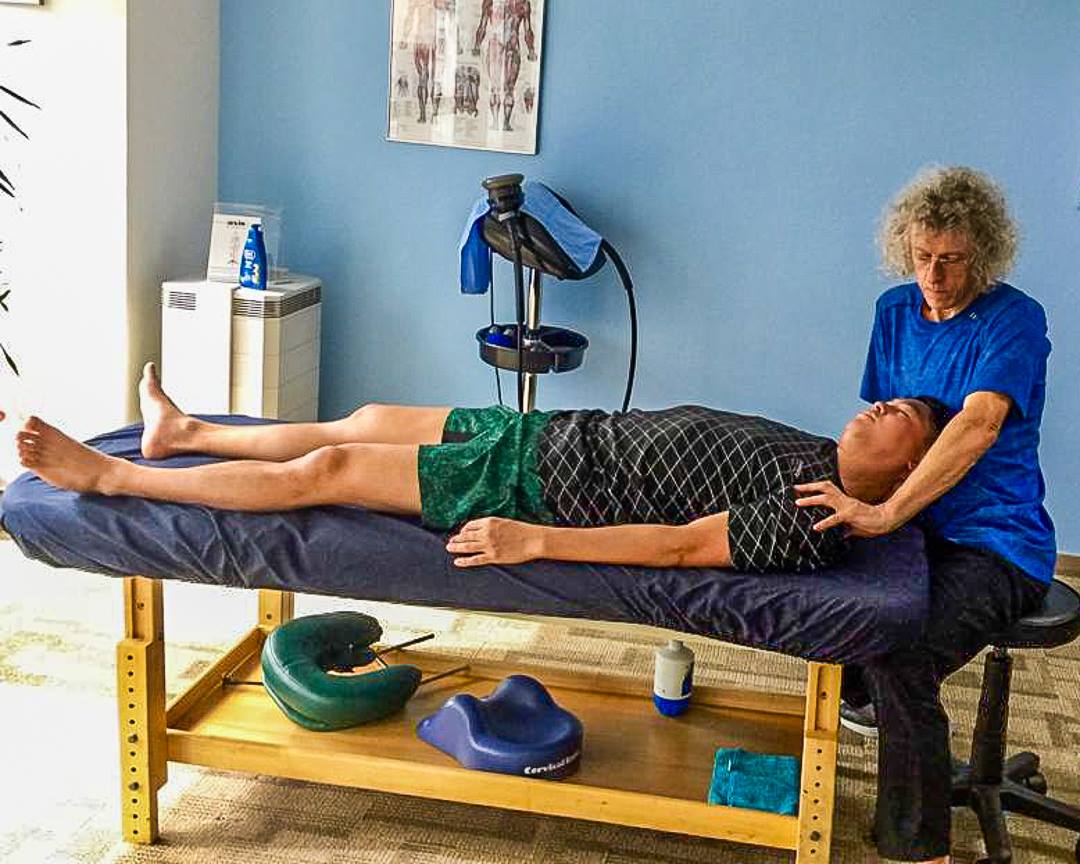 The observational findings were as follows: Subject’s entire right hip was depressed by 1.5 inches and his left hip was up-slipped by 1 inch. His lower left lumbar quadrant was hypertonic, especially the quadratus lumborum muscle. It was also very sore to the touch.

His left hip was twisted and torqued to the right side creating irritation in his sacroiliac joint on his left side. The sacrum was also torsioned to the right with some muscular and ligamental strain on L4 and L5.

The head was tilted to the right side, compressing the right side neck flexors and shoulder elevators. There was some referred pain through the brachial plexus nerve bundle translating through into the tips of the fingers.

Treatment: Active Assisted Isolated Stretching and Strengthening (AIS) is a uniquely effective exercise system developed by Aaron Mattes. Motion Dynamics uses AIS and expands on the application of the method together with other physical therapy methods. AIS is a specific program of flexibility exercises, based on sound physiological principles. AIS, which is carried out actively or assisted by a practitioner/therapist or by the subject’s own efforts (often assisted by a rope or band), is designed to specifically increase range of movement of muscles, fascia and connective tissue. During AIS, movement is carefully monitored in order to prevent activation of the stretch reflex.

The patient underwent 5 months of treatment in an attempt to transform and rehabituate his alignment. This required deconstructing his existing poor postural patterns and then reconstructing the balance and alignment.

This consisted of 40 treatment sessions, with each session lasting about 90 mins. The patient underwent these sessions twice a week.

At the start of treatment, the patient’s shoulders had only 140 degrees of shoulder flexion with a very hard end feel, suggesting a very adhesive joint capsule on both sides.

His sideways elevation was restricted by a non-gliding acromio-clavicular joint that prevented the fluid motion when the arm was raised to only 120 degrees of range.

The shoulders were also protracted forwards by a very tight pectoralis minor and weak and tight serratus anterior muscle.

The head was also forwardly protracted by 2-3 inches creating strain on the posterior extensors of the neck.

The neck could only laterally tilt less than 25 degrees to the left side due to the right side constriction of scalene and upper trapezius shortening. 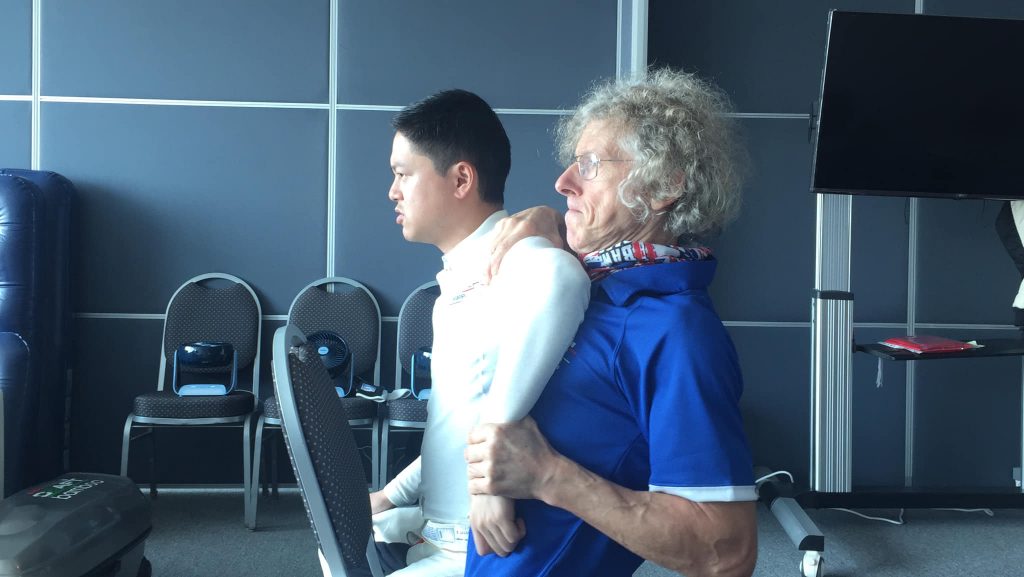 The application of the Active Assisted Isolated Stretching method used multiple sets of active and dynamic repetitive movements to slowly bring his soft tissue flexibility and joint mobility to a functional range.

These movements consisted of:

Cervical rotation with flexion at end of range In this movement, the patient tucked in the chin and rotated the neck to the right side 80 to 90 degrees, then flexed the neck by bringing the chin down towards the shoulder. He aimed to turn far enough that his chin was almost in line with your shoulder. The patient then repeats the exercise on the other side.

This specifically worked on the insertion of the upper trapezius muscle on the left side of the neck at the site of the acromium on the shoulder blade.

The patient reached a range of motion of the neck in rotation between 80 and 90 degrees. His lateral cervical flexion or side bending reached around 45 to 55 degrees.

Cervical flexion and extension This exercise has the patient touch his chin to his chest from a tucked chin position. Over the course of treatment, he reached an acceptable athletic range of motion for neck flexion of 40 to 60 degrees. Neck extension involved the patient tilting his head back. He attained a normal range of motion that allowed him to look straight up at the ceiling. The patient reached a range of motion from the neutral neck position of 45 to 70 degrees.

Cervical oblique hyperflexion and oblique hyperextension For the lateral cervical flexion exercise, the patient bent his neck to the side so that his ear was leaning towards his shoulder while looking straight ahead. He then brought his left ear toward his left shoulder, then rotated his neck 45 degrees to the right side and then drew the left ear towards the left chest. This exercise targeted the upper trapezius and levator scapular muscles. He would then perform the same exercise to the opposite side.

Having reached a normal range of motion in lateral cervical flexion, the patient was able to move halfway between straight ahead and his shoulder, which is a 45 degree angle. Shoulder forward elevation

For this exercise, the patient kept his shoulder blades set in a downward rotated position, raising his arm straight up with his thumb pointing upwards, lifting his arm through a full range of 180 degrees of forward elevation.

He then performed the same movement with the palm facing forward, followed by the arm fully internally rotated with the thumb pointing forward.

Sideways shoulder elevation For this exercise, the patient set the scapular in a downward depressed position and then abducted the shoulder with the thumb pointing upwards until the arm reached just behind the ear.

He then repeated this action with the fully internally rotated so that his thumb was pointing upwards and then abducted the shoulder until the arm touched the ear.

For these movements, the patient endeavoured not to elevate the shoulder, nor allow shoulder impingement at the acromioclavicular joint.

Shoulder internal and external rotation in multiple positions of horizontal flexion and adduction The patient held his shoulder positioned with the arm abducted to 85 degrees, horizontally adducted 5 degrees and the elbow positioned at 95 degrees of flexion. Over the course of treatments, his internal rotation range of motion with a fixed glenohumeral joint reached 80 – 90 degrees.

The patient also changed the position of the humerus by horizontally adducting the humerus by 5 degrees to release the posterior shoulder capsule. For external or backward shoulder rotation, the patient worked towards developing a range of motion between 45 and 65 degrees.

Each set of the movements described above consisted of 10 to 15 repetitions to slowly and gradually unlock the patient’s shoulder joint capsule and fascial adhesions.

The patient was taught how to stabilize and eventually strengthen the neck and shoulders to maintain all the structural work undertaken to realign and reposition the shoulder and hip joints.

He accomplished this by a process of light stability training, using his own bodyweight as well as the natural weight of gravity. We worked in all planes of motion and through full functional ranges to build stability at the origins and insertions of the entire neck structure.

Over the course of this treatment, the patient became acutely aware of where his centre of mass was located and how to gauge a neutral pelvic base.

During the initial phase of treatment, the patient showed radical improvement, and there was a slow upward curve of benefits through the rest of the period.

As a result of the Active Assisted Isolated Stretching Treatment, the patient no longer experiences any pain or irritation in his back or neck.

Prior to his beginning treatment, the patient experienced persistent back and neck pain that he described as being between an 6 to 8 on a scale of 1 to 10. After treatment, his level of constant discomfort was reduced to Zero. He was experiencing a lower back compression that was referring pain into his mid gluteal region. His neck pain had also significantly reduced when driving and also post driving when dehydration can typically cause muscle spasms in the areas of common weakness. Most importantly, the patent was experiencing improved energy output during the day and also during the race event too. The physiological effects from improving posture and mobility were profound.

After receiving the treatment described above, he was able to participate in a 24 hour car race. For this event, the patient was driving over 10 hours during a 24 hour period. Throughout, he experienced no significant pain or discomfort in his lower back.

The conclusions obtained from the application of the relevant aspects of Motion Dynamics therapy are especially effective and successful in addressing the immediate symptomatic issues experienced by the patient, and also exponentially raised his level of mobility and comfort in his neck and back. The reduction of constant pain and discomfort has a direct effect in improving his sports performance.

[1] Chris Watts is the founder of Motion DynamicsTM in Hong Kong. He holds certifications from National Certification Board for Therapeutic Massage & Bodywork; Active Release Technique; Master Trainer of Active Isolated Stretching (AIS): The Mattes Method; Myofascial Release Therapy – John Barnes Technique; Neuromuscular Therapy – Paul St. John Method; and Positional Release – Kerry D’Ambrogio Method. He has studied with Aaron Mattes, who is the creator of AIS, and Paul St. John, founder of Neuromuscular Therapy. Watts has been in private practice for over 25 years and is the author of “The Beauty of Posture” (2014). Email: info@motiondynamics.hk